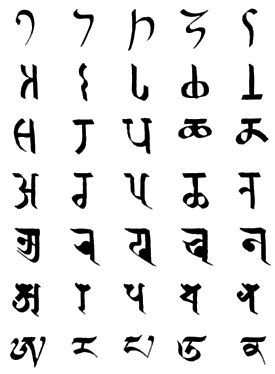 * Note that Kharoṣṭhī is usually written right to left, but I have reversed the usual order here to make comparisons easier.

The earliest references to the Arapacana occur in Gandhārā in the first centuries of the common era. Particularly important are a collection of texts found in 1998 near Bajaur in what is now Pakistan. These 1800-2000 year old birch-bark manuscripts contain a fragment which has a series of verses with keywords in the order of the Kharoṣṭhī alphabet. Other important sources include bas relief stone carving depicting scenes from the Lalitavistara Sūtra, and some engravings on the back of carvings. Salomon has used the latter to confirm the order of vowels in Kharoṣṭhī is the same as Aramaic and different from other Indian scripts.

Recent scholarship places the origins of Kharoṣṭhī in about the 4th century BCE and Brahmi about the 3rd century BCE (Salomon 1995). The model for the Kharoṣṭhī script is thought to be a form of Aramaic. Several features including the order of vowels, writing right to left, and the form of some letters make this seem very likely. Also the use of the alphabet as a mnemonic probably demonstrates outside influence, since no other Indian texts use this method, while Manichean and Hebrew sources do. We know that Gāndhārā was subject to many invasions through the Khyber Pass, and at the time of the Arapacana Alphabet the rulers were the Kushans. It is notable that also at this time images of the Buddha in human form were first made, using Greco-roman sculptural models.

The earliest uses of the word dhāraṇī probably refer to the mnemonic use of the Kharoṣṭhī alphabet. Each letter of the alphabet reminded the reciter or meditator of a word, which in turn served as the key for a reflection on the Buddhadharma. The most obvious sources of the alphabet for many years were texts written in Sanskrit, though preserving the Gāndhārī alphabetical order for the keywords. Until the discovery of the Bajaur collection, the oldest example of an Indian alphebtical mnemonic was in the Lalitavistara Sūtra. The well known Sanskrit version uses the Sanskrit alphabet, but a lesser known Chinese translation which may be older, retains the Gāndhārī order. The key source is the Pañcaviṃśatisāhasrikā Prajñāpāramita Sutra, The Perfection of Wisdom in 25,000 lines, which Conze translates in his book The Large Sutra on Perfect Wisdom which sets out the following meanings for the first syllables:

Across the various texts there is variation in the make up of the alphabet, the order, and the numberof letters. Most, but not all, of these can be explained by the process of transplanting the Gāndhārī into a Sanskrit milieu, followed by a loss of knowledge of the original language and/or script. Others may be scribal errors. A complete explanations is still wanted.

The first sentence from the Pañcaviṃśatisāhasrikā verses - akāro mukhaṃ sarvadharmāṇāṃ ādyanutpannavāt - went on to become a mantra in its own right in the Hevajra Tantra for instance.

Other references to the Arapacana Alphabet

This list is arranged in chronological order of translation into Chinese. Date, Text (translator) - Taisho number.

Both of the following lists appear in Lokesh Candra. Dictionary of Buddhist Iconography. p.2154.

The Arapacana mantra also appears in the following Chinese translations

An important text for the Arapacana mantra is:

The Large Sutra on Perfect Wisdom