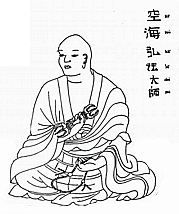 A portrait of Kūkai

Kūkai - 空海 - also known as Kōbōdaishi - 弘法大師 - was a tantric master who established the Vajrayana teachings in Japan in the early 9th century. He travelled to China in 804 and returned with many new texts, including early tantras, in 806. The school of Buddhism he founded is called Shingon-shū (真言宗) 'True Words School'. Zhēnyán (真言) is the Chinese translation the Sanskrit word 'mantra', and Shingon is Japanese pronunciation of the same characters.

Kūkai's name combines two elements. Firstly Kū (空) which in Sanskrit is ākāśa and means space, or emptiness (in the sense of śūnyata). Kūkai had a strong association with the Bodhisattva Ākāśagarbha, known in Japanese as Kokūzo. Secondly Kai (海) means sea and perhaps relates to the story recounted by Oliver Statler in Japanese Pilgrimage that Kūkai gained Enlightenment on the coast at Cape Muroto, on Shikoku Island. So 'Kūkai' might be translated as Sea & Sky.

Kōbōdaishi is a title posthumously awarded in the year 921, after the preist Kangen (853-925) lobbied Emperor Daigo (醍醐天皇). This title means Great Teacher or Master (daishi, 天皇) who widely spreads the Dharma (kōbō, 醍醐). Kūkai is also known affectionately in Shingon circles as simply "The Daishi"; or as Odaishisama (お大師様), where 'O' and 'sama' are honorifics so we could translate as "Honoured Mr Great Teacher"

Kūkai was honoured as one of the three great calligraphers of his age. On the left is a fine example of Chinese brush style calligraphy by Kūkai. The mantra is namo amitabaḥ which is the mantra Amitabha. It includes on the left Kūkai's signature and below it his seal. Several examples of Kūkai's calligraphy are available in the Ashara-jō (* see below) including a Sanskrit Alphabet.

Because of the necessity to preserve the correct pronunciation of the mantras they were often not translated or transliterated, but preserved in the Siddhaṃ script, and so along with the tantra itself Kūkai introduced the study of Sanskrit and Siddhaṃ into the Shingon syllabus. This in turn had a direct influence on the development of the Japanese Kana scripts.

Kūkai also has a mantra of his own (see below) which is chanted by Shingon practioners. In Japanese this is known as a hōgō (保譽)

This mantra is Japanese rather than Sanskrit, but Siddham can be used to write Japanese quite easily. In the Shingon school of modern times the 'Daishi mantra' is very important as he is treated as a Bodhisattva figure to whom one can appeal, as Tibetans do to Avalokiteśvara, with the hope of rebirth in Amitabha's pure land.

Hōgō means "treasure name". It is also applied to the Nembutsu (see Kūkai calligraphy above), which is a mantra associated with Amitābha. The modern Hōgō was in common use during the Muromachi era (ca 1336 - 1573), but seems to have been created in the mid-Kamakura Era by Dōhan (道範, 1178-1252) of the monastery Shōchi-in. It appears in Dōhan's work Himitsu nenbutsu shō (秘密念仏抄).

SOURCE: SHINJO Hinonishi; LONDO William (trans.) "The Hōgō (treasure name) of Kōbō Daishi and the development of beliefs associated with it," Japanese religions. 2002, vol. 27, no1, pp. 5-18

Namu is the Japanese pronunciation of the Sanskrit namo and means "homage". Daishi means "great teacher". And henjō kongō is Kūkai's tantric name: "Vairocana Vajra" in Sanskrit, and means something like "Illuminating Reality", or "Illuminating Diamond/Thunderbolt" in English.

We can translated the Hōgō as namo mahāguru vairocana vajra

I've written some short essays about Kūkai on my blog Jayarava's Raves:

There is a biography of Kūkai on Wikipedia. I wrote the original, but of course it has been edited many times since!

I recommend the website of Ronny Green on Kūkai. It is, for instance, one of the very few places with commentary on Kūkai's poetry (he was a famous poet but that aspect is largely neglected in the West.).

* The image of Kūkai's calligraphy is originally from a collection reproduced in five large concertina fascicles by the Japanese monk Sō-gen in 1837 under the title of Ashara-jō. Sō-gen traced fine examples of Siddhaṃ calligraphy and then inked in the middle, thereby creating reasonably accurate facsimilies. The original of this calligraphy was 74cm high, and has reproduced better than some of the smaller calligraphy. The Ashara-jō was republished as Sanskrit bījas and mantras in Japan edited by Raghu Vira and Lokesh Chandra (New Delhi : International Academy of Indian Culture, 1965). It is reproduced in R.H. Van Gulik. Siddham : An Essay on the History of Sanskrit Studies in China and Japan (New Delhi, Jayyed Press, 1981), p.183. For the more ambitious reader Ryuichi Abé's Weaving Mantra provides a challenge. The book is heavy on jargon, both Buddhist and Semiotics and this make it difficult. However it can be rewarding for the level of detail it offers and the perspective on Kūkai's contribution to Japanese Culture.