These lines are of the most famous explanantions of the central insight of the Buddha. It describes the workings of dependent arising, in Pāli: paṭicca-samuppāda, and in Sanskrit pratītya-samutpāda. For my etymology and exegesis of the word paṭiccasamuppāda see my blog essay: Philology of Dependent Arising. 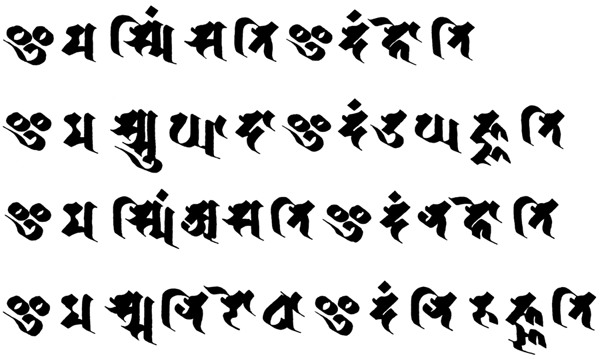 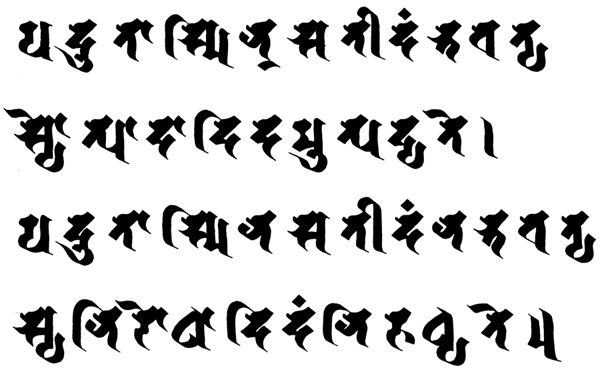 Of course Pāli was never written in this script - the Pāli tradition headed south a long time before Siddhaṃ emerged as a distinct script. Pāli was probably most written in Sinhala or Burmese script. However there is no reason not to write Pāli in this script.

In the first line, "imasmiṃ sati is a locative absolute construction, with a pronoun and a present participle both in the locative case. This kind of locative absolute can be read as "while this exists". idam hoti is a simple statement of fact "this exists". In the second line the two words imassa uppadā are in the ablative case, and thus it means "from or because of this arising". The final a of imassa is elided because of the following u. Hence "When this exists, that exists" or "this being, that becomes". That is to say, when the condition is present, the conditioned will also be present; the arising of the conditioned comes from the arising of the condition. Note this is not about the mechanism or how causation happens, only when causation can or in fact must happen.

If an action persists till the time of ripening, that would [effectively] be permanence.
If [an action] ceases, then being ceased, what fruit will be produced?

Different Buddhist traditions proposed different solutions to this problem of action at a temporal distance. See various essays on my blog dealing with this subject, under the heading Karma and Rebirth.