These words begin every genuine Buddhist sūtra. The voice is that of Ānanda, the Buddha's cousin and attendant for his last twenty-five years. According to the Buddhist tradition Ānanda was present at many teachings and after the Buddha's death was called on to recite all of them. What he recalled became the sūtrapiṭaka (Pāli: suttapiṭaka) or collection of discourses.

It is sometimes said that the language spoken by the Buddha was Pāli. However scholars agree that this is extremely unlikely. The Buddha is likely to have spoken a Prakrit related to the dialect known as Magadhi. Pāli is founded on Magadhi, but with admixtures of other Middle-Indic dialects and some Sanskritisation. The Pāli texts have been translated at least once.

This phrase is a good case study of the similarities differences between Pāli and Sanskrit. The conjunct śru devolves to the simple su. Also note the case endings, which show the grammatical relationship of the words, is different. Otherwise the words are very similar. 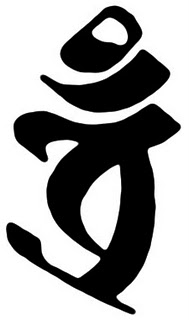 The word evaṃ is a common subject for calligraphy in Tibet. Tashi Mannox has created some beautiful calligraphy of this word on his blog: Related Tibetan Scripts. There are several ways of combining the syllables into a bīja based on the Lantsa and Wartu scripts.

I responded to this by creating a Siddhaṃ script version (right). I've also written about this word and the esoteric associations on the Visible Mantra blog.

For more information on Ānanda

Great Disciples of the Buddha

Long Discourses of the Buddha
by Maurice Walshe.