The Bodhisattva Avalokiteśvara, or Chenrezig as he is known in Tibet, is associated with the quality of karuna or compassion. His name literally "Lord who looks down", and is said to relate to his looking upon the earth and it's suffering beings with compassion. Avalokiteśvara comes in many forms. There are a number of two armed forms, and a form with one thousand arms! This image is of his four armed form is known as Ṣaḍakṣarī (six syllabled) Avalokiteśvara, because of the association with the popular mantra that this page features. He holds a cintamani or wish fulfilling jewel to his heart, and in his upper left hand a lotus in full bloom, and in his upper right hand a mālā for counting mantras.

In China, where Avalokiteśvara was very popular, he underwent a change and became Kwan Yin (觀音, also spelt Guān Yīn, and in Japanese: Kannon) a female Bodhisattva. Kwan Yin actually translates an earlier version of the name of this bodhisattva: Avalokitasvara. Svara means sounds and the name Avalokitasvara means "regarder of sounds or cries" which is how the name often appears in English translations of the Chinese Lotus Sutra for instance. The name changed as the bodhisattva absorbed some of the qualities of Śiva the Hindu Īśvara - svara became īśvara, and eśvara in combination. In Chinese Avalokiteśvara would be Kwan tzu-tsai (觀自在).

Avalokiteśvara is a member of the Lotus family which is headed by Amitabha.

The Bodhisattva Tārā, who has two common forms (green and white) is said to have been born from his tears when he observed the suffering of beings in the world.

Stones carved with the Avalokiteśvara mantra are, like prayer flags, a feature of the Tibetan landscape. The stones are piled up into cairns, or made into walls on all major routes, and in significant places such as mounain summits. 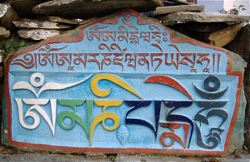 A mani stone in Sikkim featuring the mantras of (from top to bottom): 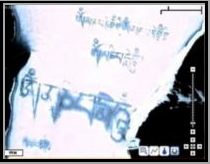 In Tibet near a place called Yushu, someone carved the Avalokiteśvara mantra into a frozen lake that can be seen on Google Maps (coordinates: 32.909982,97.04612). The tallest letters are almost 50 meters high.

Notes on the Avalokiteśvara Mantra

. The Kāraṇḍavyūha contains elements which are later equated with Tantric Buddhism, though it is not a tantric text. In this sūtra the mantra is presented in terms very similar to Pureland Buddhism: the mantra is for instance an example of namanusmriti or calling to mind the name which is an important practice in the White Lotus Sutra, and in the Sukhāvatīvyūha sūtras. Reciting the mantra is said to fulfill the six perfections and to protect the reciter against misfortune. I have summarised some of Studholme's ideas about the origins of the Avalokiteśvara mantra on my blog.

The six syllable mantra is frequently translated as "oṃ the jewel in the lotus hūṃ", maṇi being a jewel and padma a lotus, but this is probably incorrect. In the book Prisoners of Shangrila

Donald Lopez argues that it is more likely that maṇipadmā is the name of a feminine Bodhisattva, and the -e ending is the feminine vocative so that maṇipadme would mean: "O (♀) Jeweled Lotus!". Alexander Studholme however suggests that maṇipadme is a masculine or neuter locative so that it would mean "in the jewel lotus" and refer to the way in which beings are 'born' in Sukhāvatī. Despite the fact that the grammar of maṇipadme cannot be interpreted as meaning "the jewel in the lotus" this is not to say that explanations which employ the image are doctrinally incorrect.

An early Tibetan text, dated to the 9th century, on Sanskrit grammar favours this reading of the mantra. It uses the compound maṇipadme as an archetypal example of the -e case ending as a vocative:

In this mantra oṃ is uttered first because it is the essence of the five wisdoms; hūṃ which is to be translated as "be mindful of this" is placed at the end, so the actual vocative (or: invocation) in between consists of maṇi, to be translated as "jewel" and padme... ("lotus") which is the same word in Tibetan so remains unchanged in translation.

So, to this "jewel-lotus" an invocation by means of a salutation is addressed, which results in the application of case ending -e in the syllable me, which is to be translated as "O!", so that the translation of the example is: "O, jewel-lotus!".

Verhagen, P.C. "The mantra oṃ maṇi-padme hūṃ in an early Tibetan Grammatical Treatise," Journal of the International Association of Buddhist Studies. 13 (2) 1990. p.134-5. I have ommitted Tibetan equivalents, and paretheses indicating interpolations in the translation.

A typical Tibetan exegesis relates each of the six syllables to the six realms of conditioned existence. Avalokiteśvara appears in each realm offering what the inhabitants need in order to awaken from that state. Often when the mantra is written in Tibet each of the letters is coloured to match the colour of Avalokiteśvara's manifestation in that realm (see mani stone above right).

The mantra then is seen as activating that quality in the universe which liberates beings in whatever realm they are in, and this is far more important than the dictionary definitions of the words which make it up.

It is possible to write the mantra in any script, and the following are scripts associated with artificial (or made up) languages.

Books with information about the Avalokiteśvara mantra:

Kuanyin : The Chinese Transformation of Avalokitesvara
by Chun-Fang Yu.