White Tārā is also known as Sita Tārā - the Sanskrit sita simply means white or pure, and is also a name for the planet Venus.

White Tārā's mantra is the basic Tārā mantra with an extra phrase inserted. In Magic and Ritual in Tibet : The Cult of Tārā

Stephan Beyer describes how various phrases can be inserted into the mantra depending on the needs of the person working the magic. In this case we are asking for [long] life (ayuḥ), merit (puṇya), and wisdom (jñāna). See also below.

White Tārā is distinguished from Green Tārā (other than their colours) by having both legs tucked up in the meditation posture, and by having seven eyes: the two usual ones, and then one in her forehead (the Wisdom Eye) and one in each palm and the soles of her feet.

White Tārā is associated with the Padma family of Amitābha, who in graphical representations appears in the form of Amitāyus (Infinite Life) and sits in her headdress, or above her head.

Notes on the mantra

For the elements shared with the general or Green Tārā mantra please see the Green Tārā page.

There are some interesting linguistic observations on this mantra. Mama __X__   puṣṭiṃ kuru means something like "make my X increase" - this is not a request, but a demand! Kuru is second person singular imperative of the verbal root √kṛ 'to make, to do'; puṣṭim (an action noun from the verbal root √puṣ) means increase, cause to thrive, nourish, fulfil. Mama is the gentive singular of the 1st person pronoun, means "my" or "mine".

The mantra in Siddhaṃ above uses the word āyus 'life' in the form āyuḥ which is required by sandhi. The form āyur is sometimes seen though it is technically incorrect. Puṇya means 'merit' and jñāna is 'knowledge' or 'wisdom'. Āyuḥ, puṇya and jñāna are all undeclined forms which suggests they are part of a compound: āyuḥpuṇyajñānapuṣṭiṃ meaning 'increase of life and merit and wisdom'. Generally the FWBO uses the mantra in the form āyuḥpuṇyajñāna. The sādhana of White Tārā as passed down from Dhardo Rinpoche, via Sangharakshita, to the WBO, uses āyur. I have used āyur in the Tibetan calligraphy. Some schools of thought suggest that the mantra should be pronounced exactly as transmitted, and others say that if along the way the Sanskrit has been corrupted then it should be corrected and pronounced correctly.

The mantra can be modified by replacing the mama 'mine' with the name of a person whom you wish to benefit - like a transference of merit. (see below for an example of this).

I have seen the mantra written in Tibetan with jñāna spelt dzñāna - similar to the way vajra is written badzra. There must be a phonetic nuance in Tibetan pronunciation of the ja in combination with another consonant that pushes it towards dza (the two are quite similar). It does rather obscure the Sanskrit unless you know this.

Other forms of the mantra

The "White Tārā" mantra is the Tārā mantra with some extra words which request long life, merit and wisdom for the practitioner. A variety of other forms of the mantra are given to request other qualities or perform particular actions. I've indicated the most likely grammatical forms because they are clear in my sources, but don't worry if you don't know Sanskrit grammar just insert the word as you know it - mantras seldom stick to Classical grammar in any case.

Use words in the nominative singular.

Use words in the accusative plural case. To pacify the fear of something add the word 'bhayaḥ' after the thing you fear.

The -bhyo is, generally speaking, the ablative meaning 'from', the base for is -bhyaḥ but it changes to -bhyo when followed by r.

In the Friends of the Western Buddhist Order we often chant the White Tārā mantra for the benefit of our founder Sangharakshita, using the familiar honorific Bhante. 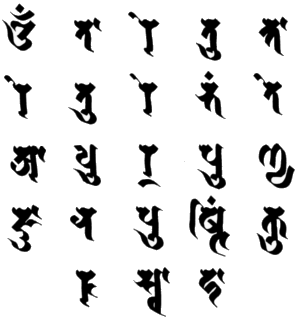 This example uses ayur which becomes three characters: a yu r (r with the virama character to indicate there is no vowel). Bhante is written according to the convention which uses the anusvāra for any nasals - ie it's written: bhaṃ te.

Magic and Ritual in Tibet : Cult of Tārā