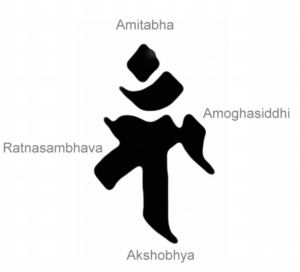 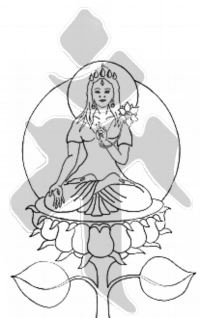 White Tārā appears to have a special relationship to the Mandala of the Five Buddhas. I originally noticed this while contemplating the yellow Buddha Ratnasambhava whose mudra is varada or giving. This the also the mudra of White Tārā's rigt hand. It occured to me that White Tārā's left hand was in the Abhaya Mudra which is the mudra of Amoghasiddhi. These two Buddhas sit opposite each other in the mandala. White Tārā has Amitabha sitting in her head-dress - which places him in the appropriate place for the mandala. And she sits in the Vajrāsana and the vajra is the symbol of Akṣobhya. In the center of the mandala usually sits Vairocana. However when a figure is white we can consider that they have moved to the centre, so White Tārā replaces Vairocana to complete the mandala.

The same relationship can be seen in the tāṃ. Following the same order... the right-hand of the tāṃ stretchs out and down just like Ratnasambhava; the left-hand is represented by the ā mark and looks like the mudra of Amoghasiddhi; the anusvāra represents Amitabha sitting in Tārā's head-dress; and the stem of the tāṃ is the vajra of Akṣobhya.

This could all be a conincidence of course, and I have not come across it in any of texts on Tārā. However the world view of Tantra is that knowlegde is based on resemblance and relationship - whereas the modern scientific world view seeks knowledge through indentity and separation (this difference is explored in Michel Foucault's The Order of Things

). We see this in Tantra with the associations between the five Buddhas, the five wisdoms, the five elements, the five directions (compass points plus center), the five poisons, etc, etc. In the Vedic tradition this correspondance is known as bandhu - a bond. It is this kind of bond which allows a mantra or seed-syllable to represent a Buddha for instance.

One of the mysteries about White Tārā is that she has seven eyes. These are explained in vairous ways - for instance they represent the four noble truths and the three liberations. This has always struck me as somewhat arbitrary, and does seem to have much connection with the myth of Tārā. If we accept the correspondance with the mandala then perhaps five of the eyes might represent Buddhas. Four of the eyes are at the extremities, and that the extremities stretched out are at the corners of a square - which suggests a mandala. A fifth eye is in the center of White Tārā's forehead. This is traditionally the wisdom eye - the 'eye' which opens in Buddhas when they Awaken. The fifth eye is, then, at the center of the mandala. This leaves two eyes in the usual places - White Tārā's own eyes. So far I've found no traditional confirmation of this scheme, but I find it quite a pleasing explanation.

One aspect of this is a point I have been making lately. The Buddhas and Bodhisattvas are not really people. The common depictions are however of them in human form. In the west this has, I think, unfortunate resonances with Christian imagery. So the Buddha can come to be seen as a man sitting on a lotus floating up in the sky, an Bodhisattvas start to llok a bit like angels. Sounds are equally good representations of Buddhas and Bodhisattvas, as are written mantras and seed-syllables. I think this is worth reflecting on.